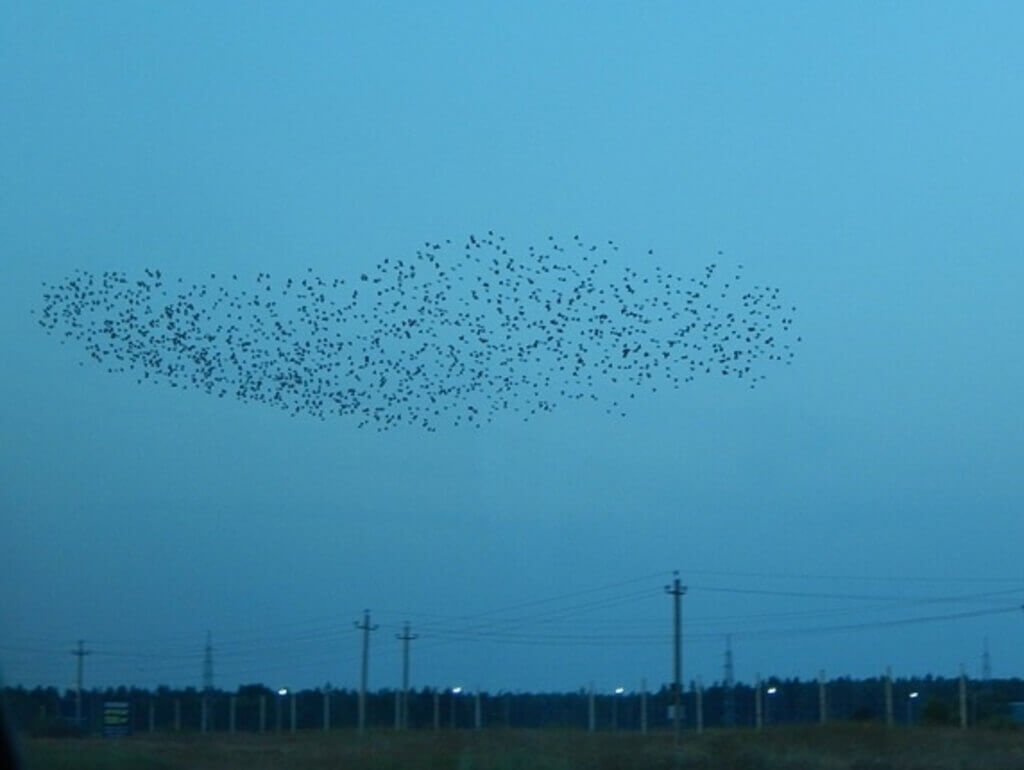 Have you ever wondered why birds fly in circles? It’s a beautiful sight to see, but what’s really going on?

Birds are known for their aerial acrobatics, and one of the most common maneuvers is flying in circles. But why do birds fly in circles? There are a few different reasons.

Why do birds fly in circles?

One of the most spectacular sights in nature is birds riding on columns of rising air, also known as thermals. You see them doing this while they are migrating, trying to conserve their energy as much as possible.

As they move through the sky looking for food, they come across rising columns of air called thermals. In thermal soaring, birds fly in circles within the rising air currents or thermals.

This is a fairly easy way to fly without flapping their wings, since they get a positive lift force from the rising air.

What causes birds to fly in circles?

Birds fly in circles to save as much energy as possible. As they move through the sky, they come across rising columns of air called thermals.

In thermal soaring, birds fly in circles within the rising air currents or thermals. This is a fairly easy way to fly without flapping, since they get a positive lift force from the rising air.

Why do birds fly in circles at sunset?

Birds flying in circles at sunset, also known as murmuration, is a spectacular sight to witness. There are several reasons why they do this.

The first is protection against predators – the birds are more visible or have increased aerodynamics when they fly together in larger flocks. Additionally, it provides them with visual cover from above and could help them pick up on disturbances from below.

Another reason might be to communicate, and share information on feeding sites. Lastly, the birds may simply be gathering before roosting for the night.

Why do birds fly in circles in the morning?

Birds will rise high into the air before dawn, often giving a strong upward beat with their wings. This is called “thermaling”, where birds take advantage of an updraft of warm rising air in order to gain height with as little effort as possible.

Once at high height, the birds can glide for considerable distances without expending much energy. The circling movement helps them to stay within an area of rising warm air and allows them to glide efficiently.

Why do birds fly in circles before a storm?

When birds fly in circles before a storm, they are conserving their energy. When a storm front approaches, the air turns cool. Birds seek to fly on thermal air currents and to avoid flapping their wings as much as possible.

Flying directly into the wind would require them to use much more energy to fly, and risk exposing themselves to the extremely strong winds of a storm.

Murmuration is a type of flight exhibited by many birds, including the common starling and house sparrow.

It is a circular or elliptical pattern of flight, often performed in groups or clusters, and characterized by a high degree of synchrony and coordination among the birds. This can be a sign of excitement or fear.

Why do birds fly in circles together?

Have you ever wondered why birds fly in circles together? Well, birds flying in circles remain as a single organized entity. It is a way of conserving energy, preventing cold and fighting off predators.

Besides this, it assists birds to stay together as they can communicate with each other effectively and move at the same speed. All flocks are well organized, and their precise movements ensure utmost efficiency.

What is the spiritual meaning of birds flying in circles?

Have you ever noticed birds flying in a circle around you? This is interpreted as either an omen  signifying good luck and fortune, or the spirits of deceased loved ones visiting you from Heaven.

If this happens, it’s best to stop what you’re doing and pay attention. In Native American culture, it’s believed that if a bird does this, they are delivering a message from your spirit guide.

Why do birds circle their prey?

It is a common misconception that birds circle their prey because they are not able to decide on the best time to attack. It turns out, there is actually an evolutionary reason for this behavior.

Birds also continue circling until they have determined whether there are any other animals, and it’s safe to do so. If these conditions are met, the bird will then dive in for their prey.

Why do birds circle around dead animals?

Birds circle around dead animals because they’re looking for food.  Some birds eat meat, and will be attracted to a dead animal by the smell of rotting flesh or maggots that are feeding on it.

Why do birds fly around crazy?

Have you ever seen a group of birds flying around crazy in a large formation, almost completely synchronized?

These groups are called murmurations and are comprised of many generations of family flocks. They gather together to communicate, protect one another from threats, and keep warm as the group moves.

Which birds fly In circles?

Birds such as pigeons, starlings, blackbirds and sparrows tend to fly in circles. Such a formation helps to confuse the predators, thereby protecting themselves from falling prey to them.

Flying in a group also provides these birds with thermal updrafts from the air, which helps them save energy and fly longer distances.

There is no one answer to the question of why birds fly in circles. Each type of bird has a different reason for doing so. However, one thing is for sure – it is an amazing sight to behold!